The all-new BMW X3 and BMW X4 have arrived in Brunei, thanks to BMW Asia and QAF Auto.

For the second phase of the model cycle, BMW has refreshed its successful Sports Activity Vehicle (SAV) BMW and the Sports Activity Coupé (SAC) BMW with a new look, improved equipment and a range structure which has been optimised for customers.

The redesigned front end and revised rear section lend even clearer emphasis to the robust off-road look and sporty appearance of the third-generation BMW X3.

Its coupé counterpart, the second-generation BMW X4, adopts the new front end, adds its own accentuation with the exclusive BMW mesh kidney grille and offers a particularly dynamic rear end. The refresh is rounded off with a modern interior with new equipment features and updated infotainment.

In Brunei, the new BMW X3 and BMW X4 are fitted with the all-wheel drive system BMW xDrive as standard.

A new range structure ensures a greater focus on sportiness and “X-ness” as well as enhanced clarity through deliberate reduction.

The M Sport package and the familiar M variants are available as an alternative to the standard equipment enriched with high-quality X elements.

The new BMW X3 and BMW X4 are produced at the Spartanburg plant in the USA.

The new BMW X3 has a more modern appearance that conveys a more powerful presence, with design changes to the front and rear and an emphasis on classic X-elements.

The BMW kidney grille and headlights have been redesigned along with the front apron and rear bumper, while new graphics have been applied to the rear lights.

High-quality X elements such as underbody protection and specific side skirts in the style of the previous X Line are already standard. The sporty genes of the SAV are underlined by the M Sport package and the new BMW X3 M40i.

With the redesigned BMW kidney grille, headlights that are around ten millimetres flatter and the new front apron, the new BMW X3 looks almost like a new vehicle. More strikingly shaped, especially in the upper area, the BMW kidney grille is larger than before and now comprises a single-piece frame.

The front headlights feature adaptive LED headlights with Matrix function, where the adverse weather light takes on the function of the previously separate fog lights while the BMW Laser Light with a range of up to 650 metres is now also available as an optional extra. 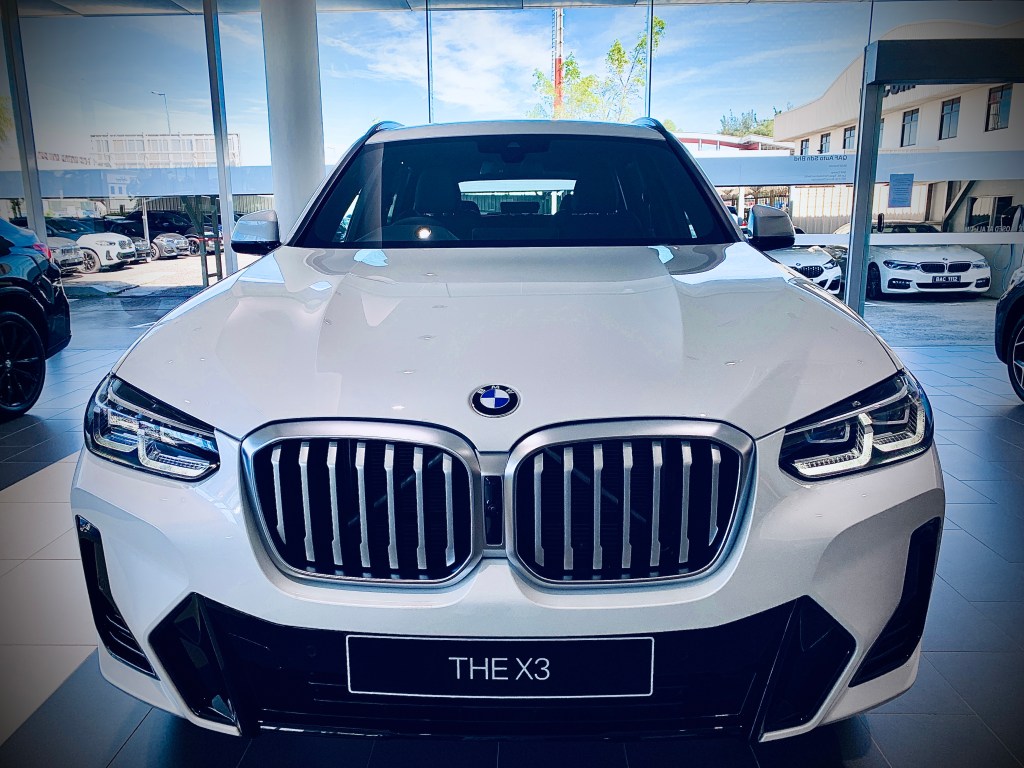 Below the headlights, vertical air intakes arranged in a triangular interpretation frame the front bumper. In the new front apron, taut and amply-sized surfaces in body colour and the robust underbody protection reinforce the presence and high-quality aura of the SAV.

The emphasis on horizontal lines, for example in the concave area at the lower end of the tailgate, contributes to the tidy impression of the rear. The newly designed and elaborately painted underbody protection provides a powerful finish to the road. The new, flush-fitting free-form tailpipe trims are larger and sportier, conveying a more powerful presence.

The sportier rear bumper includes a more striking diffuser finished in Dark Shadow along with two additional side air-curtain-panels in high-gloss black. The standard trim includes the new 20-inch Double-Spoke 699 or 787 M alloy wheel, as well as the M Sport brake with blue or red brake calipers.

Further visual differentiation is offered by the new BMW X3 M40i, which shows its affiliation to the BMW M GmbH portfolio with a specific BMW M kidney. In addition to a chrome frame, it bears the typical M double grille bars in high-gloss black and with an M logo. While the same aprons as in the M Sport package are to be found at the front and rear, the aerodynamically optimised M exterior mirrors in high-gloss black, the free-form tailpipe trims in black chrome and the striking “Two Teeth” design ensure a distinctive look.

The new BMW X4 adopts the new front end of the new BMW X3, but adds an exclusive distinguishing feature in the form of the mesh kidney familiar from other sporty BMW models.

Just like the new BMW X3, the adaptive LED headlights with Matrix function are also standard, while the BMW Laser Light, which is particularly light-intensive and has a long range, is also available as an option for the new BMW X4.

Featuring flat full LED rear lights that emphasise the vehicle width and protrude strikingly from the vehicle body in their three-dimensional design, the rear section now has an even more clear-cut shape in the new BMW X4 revision.

The new rear apron has a tidier appearance, with an increased proportion of painted surface and reflectors now placed vertically and lower in the bumper. The wide free-form tailpipe trims echo the horizontal lines of the upper section.

In M Sport guise, the frame and inserts of the new BMW X4’s kidney grille can be painted in high-gloss black on request. In addition, the car comes with a new rear apron with a wide, offset insert in the shape of an anvil.

Like the side air-curtain-panels, this is finished in high-gloss black and gives a powerful overall impression that is distinctly road-oriented.

The new BMW X4 M40i is based on the appearance and standard equipment of the corresponding BMW X3 model and bears typical BMW M insignia such as the specific BMW M kidney with chrome frame, double kidney bars in high-gloss black and M logo as well as the aerodynamically optimised M exterior mirrors in high-gloss black.

The rear apron with its anvil-shaped insert is complemented by air curtain trim in high-gloss black. Analogous to the new BMW X3 M40i are the free-form tailpipe trims in black chrome with the two “teeth” and the tyres.

Following the redesign of the BMW X3, BMW offers a total of 11 paint finishes in the regular range.

The metallic paint finish Skyscraper Grey is new, and as is M Brooklyn Grey metallic from the M Sport package upwards, along with the two BMW Individual paint finishes Aventurine Red and Tanzanite Blue.

The new metallic finish Piedmont Red is available exclusively for the new BMW X4. For the first time, there is also a choice of numerous special BMW Individual paint finishes for the two models, including matt finishes such as Frozen Deep Grey.

The range of special finishes available is to be further expanded in the future.

The new BMW X3 and BMW X4 adopt the centre console of the current BMW 4 Series.

The free- standing, central Control Display with touch function now offers a screen diagonal of 10.25 inches as standard in all vehicles. A 12.3-inch version of the touch display is also available as an option.

In addition to the cupholder and a model-specific emblem, the centre console accommodates the newly designed control island with the gear selector lever, buttons for the start/stop system, the electric parking brake, hill descent control and various driving experience functions as well as the BMW Controller. The engine start button is positioned here, too.

Additional functions are offered by the standard Ambient Light, which features contour lighting above the decorative trim in the dashboard and ambient lighting that shines gently downwards below the accent trim to create a particularly high-quality, relaxing atmosphere in the interior.

In refreshing the BMW X3 and BMW X4, BMW has reorganised and once again significantly expanded the range of modern driver assistance systems to enhance both comfort and safety.

The Driving Assistant, available as standard, offers the driver comfortable relief and increased safety in driving situations where there is a conscious desire for assistance.

With the BMW Live Cockpit Professional as standard and intelligent networking including innovative digital services based on BMW Operating System 7, the new BMW X3 and BMW X4 now offer particularly close interaction between driver and vehicle.

The BMW Live Cockpit Professional offers a fully digital display network: the high-resolution instrument cluster behind the steering wheel and the Control Display each have a screen diagonal of 12.3 inches.

Here, the driver can view all the important information from the apps on the Control Display and also – in intelligently processed form – in the instrument cluster and the optional BMW Head-Up Display.

With Android AutoTM, the BMW Group has added another customer-relevant service to its range of seamless in-vehicle connectivity, offering easy and safe use of smartphone functions such as music, media or messaging apps while driving.

The BMW Intelligent Personal Assistant is also constantly gaining additional capabilities in the new BMW X3 and BMW X4, creating an even more intensive bond between driver and vehicle. With the digital companion, naturally spoken instructions can now be used to regulate the air conditioning, open and close the windows or change the driving experience switch modes, for instance.

Here are the vehicle specifications:

The new BMW X3 and BMW X4 are now available for viewing at QAF Auto BMW showroom in Beribi.