The government is moving from a monthly salary disbursement to twice a month in order to improve the personal financial management of its employees, said Dr Hjh May Faezah Hj Ahmad Ariffin, deputy permanent secretary at MoF.

In an interview with state broadcaster RTB, Dr Hjh May explained the rationale behind the move, saying it would improve cash flow management and spending planning, as well as help sustain commercial and economic activity, making the domestic economy more resilient.

The change will affect all civil servants whose salary is disbursed through the Treasury Department, covering those who hold permanent, contractual, monthly, open-vote or daily-paid status.

Staff employed under statutory bodies and government-linked companies (GLCs) will not be affected. However, the initiative can be implemented subject to the approval of their respective boards.

The move will also not affect trainees under the i-Ready scheme and the Capacity Development Centre, and recipients of government welfare and pensions.

Screenshot from RTB shows the dates of salary disbursement for 2018: 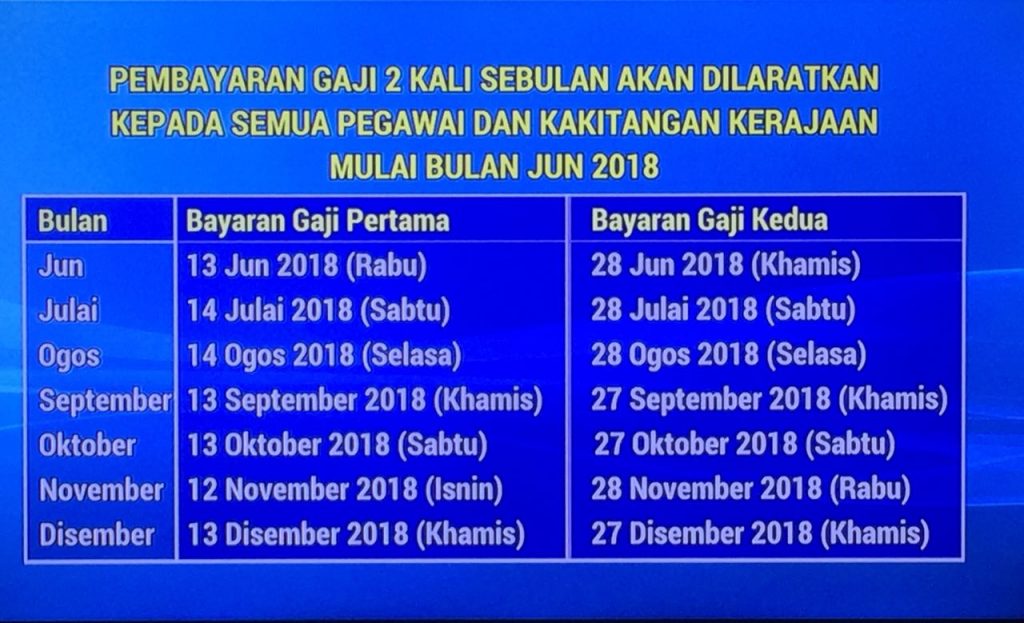 Screenshot from RTB shows those who will not be affected by the change, including GLCs and pensioners: 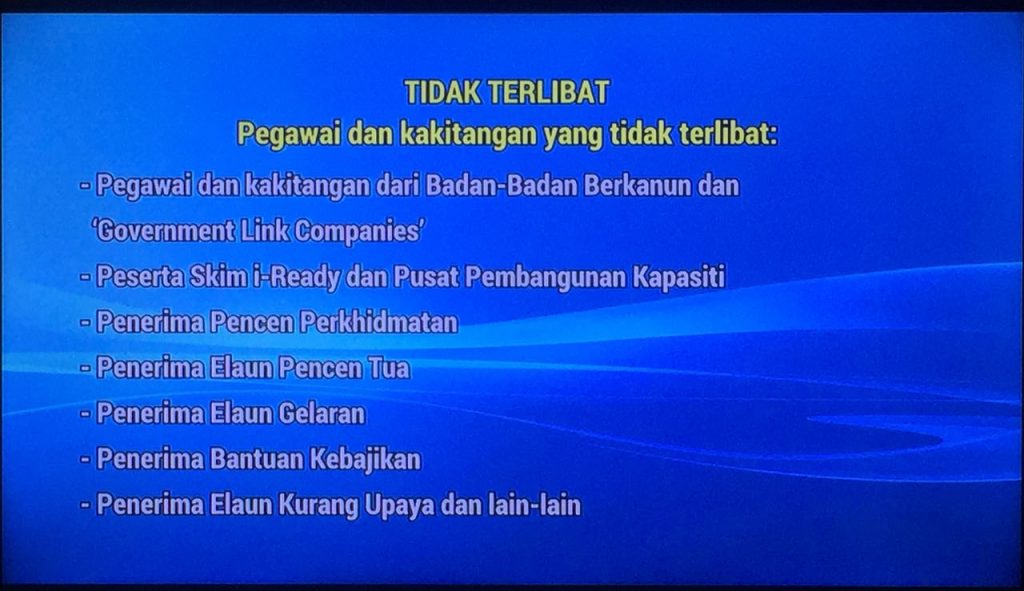 The government initiated a trial of the bi-monthly payroll back in January with 13,000 employees from the Prime Minister’s Office and the Ministry of Finance, in order to allow Treasury to evaluate feedback.

On its website, the ministry published a Q&A to address public concern over the new salary system.

The MoF said the move will not affect employees’ banking and loan commitments as the government has already negotiated with financial institutions to streamline their services with the new salary system.

For loan repayments, banks will hold half of the payable amount during the first salary payout (mid-month) and will deduct the full amount on the second monthly payout (end of the month).

The new salary system will also affect allowances, but not the annual bonus.

However, the the ministry added that other lending services such as credit card repayments are the individual’s own responsibility, and subject to the agreement between bank and customer.

The introduction of the bi-monthly payroll is part of wider government efforts to reduce consumer debt in Brunei, which reached $3 billion in 2003 — 65 per cent of which came from unsecured lending via credit cards and personal loans.

A loan cap was introduced in 2005 to reduce the amount people were allowed to borrow against their net monthly income.

And in 2015, Authoriti Monetari Brunei Darussalam (AMBD), the financial sector regulator, capped the total debt service ratio (TDSR) at 60 percent to protect Bruneians from falling into a debt trap. However, following customer feedback, AMBD revised the TDSR to 70 percent for property financing.

Brunei’s central bank said the measures have had a positive effect, with household debt falling from $2.3 billion in 2010 to $1.6 billion in June 2017 — a decline of 30 percent.