BANDAR SERI BEGAWAN – Running from one end of the country to the other might seem like a slightly madcap scheme.

But Britain’s High Commissioner to Brunei Richard Lindsay sees it as a prime opportunity to raise awareness on the impact of climate change and how it threatens our coastline and seas.

The envoy is aiming to be the first person to ever run the length of Brunei’s coastline — about 130km from Kuala Belait to Muara — over two days this weekend.

“There are two things we wanted to do through this run. The first is to demonstrate the beauty of Brunei’s incredible natural environment and coastline, which is stunning. The second is to raise awareness of the risk to our oceans and beaches all over the world from plastic pollution,” he said.

Globally, plastic waste makes up 75 percent of marine litter and it is estimated that eight million tonnes of plastic enters oceans every year.

“We’ve seen an incredible change in Brunei over the past couple of years. It’s the youth who are out there showing we should reduce the amount of plastic that we use, and manage the waste the we as humans create.

“During my time in Brunei I’ve been involved in a variety of beach cleanups organised by a number of fantastic NGOs, many of whom are youth-led.”

The blight of plastic bags, bottles and other marine pollution washed up along the shore is unfortunately a common sight in Brunei. No matter how many beach clean-ups are done, there is still more plastic waste that makes it way to the shore.

The government has been actively trying to reduce the use of single-use plastics by phasing out the use of plastic bags in major supermarkets and mulling a ban on styrofoam imports.

While there is no data on the overall amount of plastic pollution in Brunei, the Department of Environment, Parks and Recreation estimates that of the 189,000 tonnes of solid waste disposed every year, 16 percent is plastic.

“I am delighted to be able to use the run to raise awareness of two causes which are very important to me personally… One is Plastic Oceans UK, which is a UK-based NGO supporting global action and education to protect the ocean from plastic pollution.

“The other is SMARTER Brunei, an organisation that provides support for individuals with autism… SMARTER runs three centres supporting children and young adults. They rely on support from the public to enable their dedicated staff to continue their essential work.”

The high commissioner will be joined by 25 other runners from the Royal Brunei Armed Forces and British Forces Brunei, who will battle extreme heat, high humidity, soft sands, and even the risk of crocodiles along the 130km route. 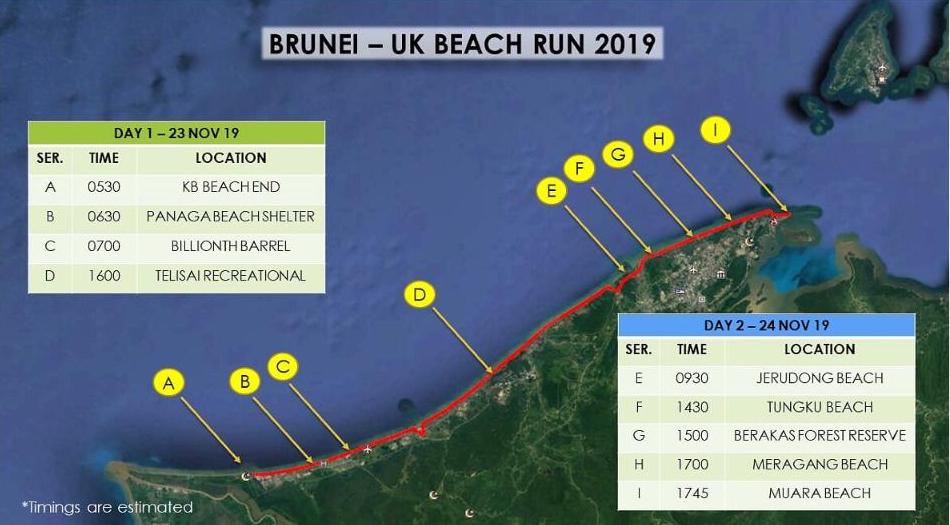 The run will begin at KB Beach on Saturday at 5.30am. Runners will overnight at the RBAF Tutong Camp, then continue on to Muara Beach on Sunday morning.

“There is more biodiversity in one square kilometre of Brunei than the whole UK. The impact of plastic pollution and climate change on that incredible richness could be devastating,” Lindsay added.

Those interested in donating to Plastic Oceans UK can follow the link here, while donations to SMARTER Brunei can be made here.

To listen to our full interview with British High Commissioner Richard Lindsay, download the Progresif Radio app and go to On Demand > What’s the Scoop.