Almost 40 dengue cases recorded in first four months of 2018, half in Kampong Ayer MoH expects the number of dengue cases to rise and is urging residents to maintain good hygiene

Brunei has recorded 37 dengue cases in the first four months of 2018, with half of them detected in Kampong Ayer, the Ministry of Health (MoH) said on Tuesday.

This number is expected to increase as the water village continues to top the list of hotspots for dengue, the Director of Environmental Health Division, Dr Hjh Anie Haryani Hj Abdul Rahman said.

Comparatively, in the first four months of 2016 and 2017, the number of dengue cases only reached single digits, with a total of six and eight cases reported.

According to the health ministry, there is added cause for concern this year as the disease tends to surge every three to four years.

The highest number of dengue cases ever recorded in Brunei was 436 back in 2014. 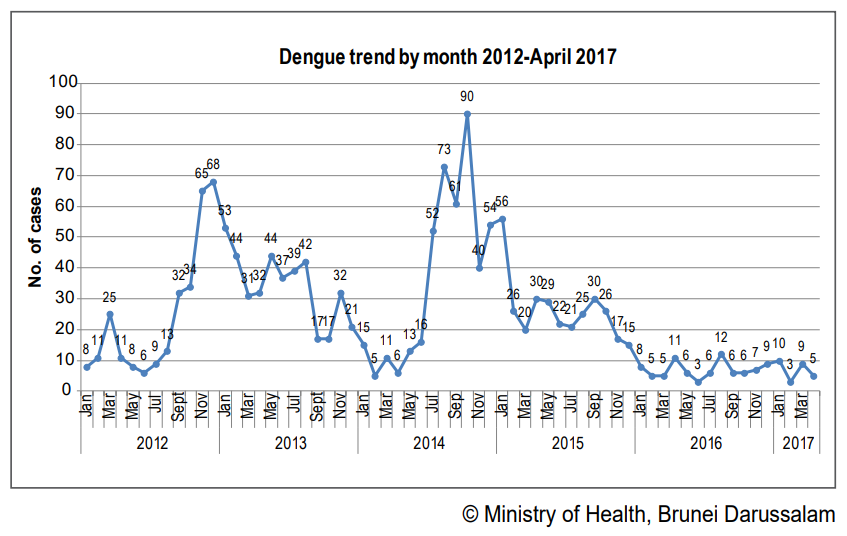 As part of efforts to raise awareness, the MoH briefed grassroots leaders from Kampong Ayer on the current status of dengue in the country.

According the ministry’s statistics from October 2017 to April 2018, 16 cases were recorded in Mukim Sg Kebun; 14 in Mukim Burong Pingai Ayer; five in Mukim Peramu; three in Mukim Saba; and two cases in Mukim Tamoi.

Dengue is an acute vector borne disease endemic to Brunei, spread by the Aedes aegypti mosquito.

There are two types of the disease: dengue fever and dengue hemorrhagic fever. The first is a viral infection caused by the dengue virus, transmitted by mosquito bite;  while the latter is a complication of the disease that can be fatal.

A dengue infection can go unnoticed with no apparent symptoms.

Most of the cases reported in Brunei are patients with dengue fever, said Dr Hjh Martina Melati Dato Seri Paduka Hj Kifrawi, a medical officer at the health ministry.

“In 2017, we had two dengue hemorrhagic fever cases,” she said, noting that there have been no reports of the deadly strain this year.

“There is no specific treatment for dengue. We provide patients with supportive treatment (such as fluid and blood replacement) following the infection. Patients are monitored closely for dengue shock syndrome. Depending on the condition of the patients, they are usually discharged within three days.”

Senior health officer Hj Jaafar Hj Jais said the spread of dengue is closely related to environmental factors, such as an increase in rainfall, or stagnant water in uncovered vessels which create breeding sites for mosquitoes.

Tackling the spread of the dengue requires elimination of breeding sites, he said, urging residents to maintain cleanliness in and outside their houses.