During its annual general meeting on Friday, BIBD said in 2019 its net profit rose five percent to $155.4 million compared to $147.9 million in 2018, which it attributed to financing, leasing and investment activities.

The bank’s board of directors approved a dividend of 18.38 cents per share, a 51 percent increase from 2018.

The financial institution said shareholders received a 12.3 percent return on equity in 2019.

The Brunei government is the majority shareholder in BIBD, via stakes owned by the Brunei Investment Agency and the Ministry of Finance and Economy. Other shareholders include the Sultan Haji Hassanal Bolkiah Foundation and approximately 6,000 individual investors. 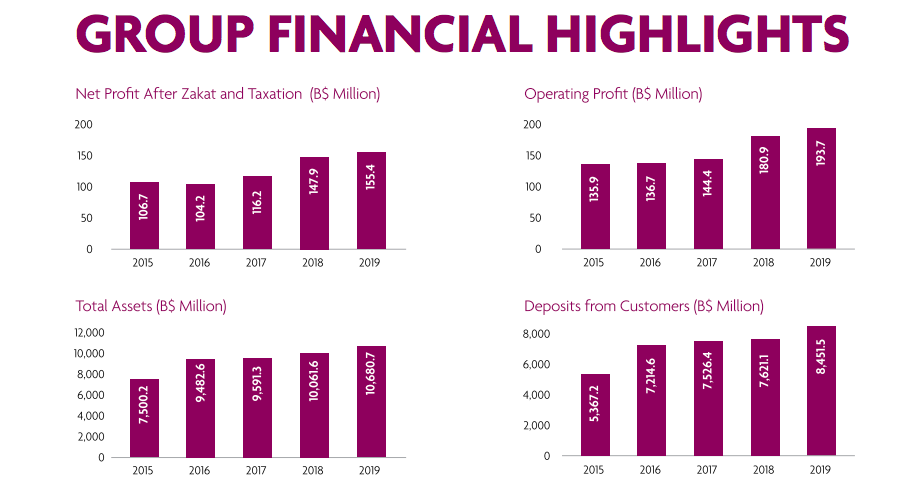 “The Group was also able to maintain total capital adequacy ratio at 18.3 percent, which is well above the regulatory requirements, and allows us to sustain a resilient capital position to support the execution of our strategies,” he said in his capacity as chair of the BIBD Group of Companies.

Managing Director and CEO of BIBD Mubashar Khokhar said in the coming years the bank aims to become “the best Islamic bank in Asia-Pacific”, and would not rule out an entry into foreign markets.

“The next pragmatic move would be to challenge ourselves by benchmarking BIBD with the best Islamic banks in the region.

“This aspiration does not necessarily mean that BIBD has immediate plans and ambitions for entry into other regional markets, although this cannot be ruled out in the future,” he said in the report.

As an Islamic financial institution, the BIBD Group also pays zakat (tithes) – a proportion of wealth redistributed as charity, which is a religious obligation in Islam.

The annual general meeting was convened with shareholders’ designated proxies due to the COVID-19 pandemic.

The proxy arrangement ensured the physical attendance of only necessary participants “without compromising or affecting the rights of shareholders” to participate and vote at the annual general meeting, BIBD said.

BIBD has over 900 employees and more than 216,000 customers, giving it a dominant market position in Brunei.