BANDAR SERI BEGAWAN – The Brunei economy grew 2.8 percent in the second quarter of 2020, buoyed by increased exports of petrochemical products but most sectors struggled with COVID-19-induced losses.

Data showed that the economy continued to ride on strong revenue growth in the downstream sub-sector despite the government’s coronavirus control measures, which were put in place in March before restrictions began easing in May.

Downstream activities – including the production of petrochemical products – soared a whopping 481 percent year-on-year (YoY), according to the Department of Economic Planning and Statistics’ (DEPS) Q2 2020 GDP report.

Earnings from the downstream sub-sector contributed to a 8.1 percent growth in the non-oil and gas sector, which accounted for 53.2 percent of the Q2 GDP. 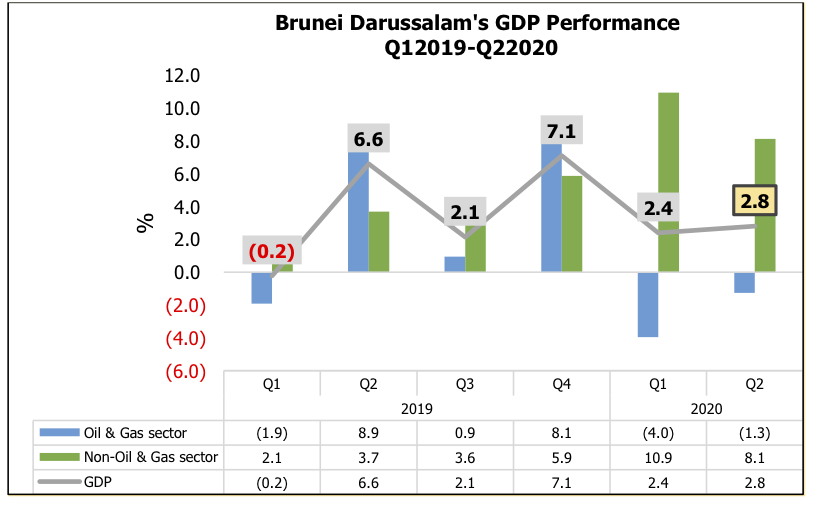 The GDP growth rate defied analysts’ expectations of a sharp economic slowdown in the second quarter as social distancing measures were projected to take a toll on revenue.

In its Brunei Economic Update for October 2020, the think tank Centre for Strategic and Policy Studies (CSPS) said coronavirus control measures have had a “relatively muted” impact on the economy.

“Growth in the first half of the year has been more resilient than anticipated, almost wholly supported by the production of petrochemicals,” it added.

With an investment of US$3.45 billion in the first phase, the Hengyi refinery is the largest foreign direct investment project in the sultanate.

Brunei’s GDP growth of 2.4 percent in the first quarter of 2020 was also largely attributed to the downstream sub-sector’s strong showing.

The downstream sub-sector is expected to continue driving Brunei’s economic growth in the second half of the year.

CSPS projects that Brunei is one of three economies in Southeast Asia to remain in positive territory in 2020, with a growth rate between one to two percent.

However, the overall oil and gas sector contracted by 1.3 percent in the second quarter of 2020, owing to a 7.4 percent drop in liquefied natural gas (LNG) production.

The share of crude oil and LNG in total exports also declined to a record low of 36 percent in May due to the collapse in global energy prices, according to CSPS.

It was previously reported in April that Brunei had agreed to cut oil production as part of the OPEC Plus grouping’s plan to stabilise prices following an oil price crash triggered by the pandemic.

Crude oil prices have since recovered from the April low, but are still substantially below pre-pandemic levels due to weak demand.

CSPS further stated that Brunei experienced a trade deficit for the first time since monthly records began in 2003, after a 30 percent fall in exports of refined petroleum exports in June. 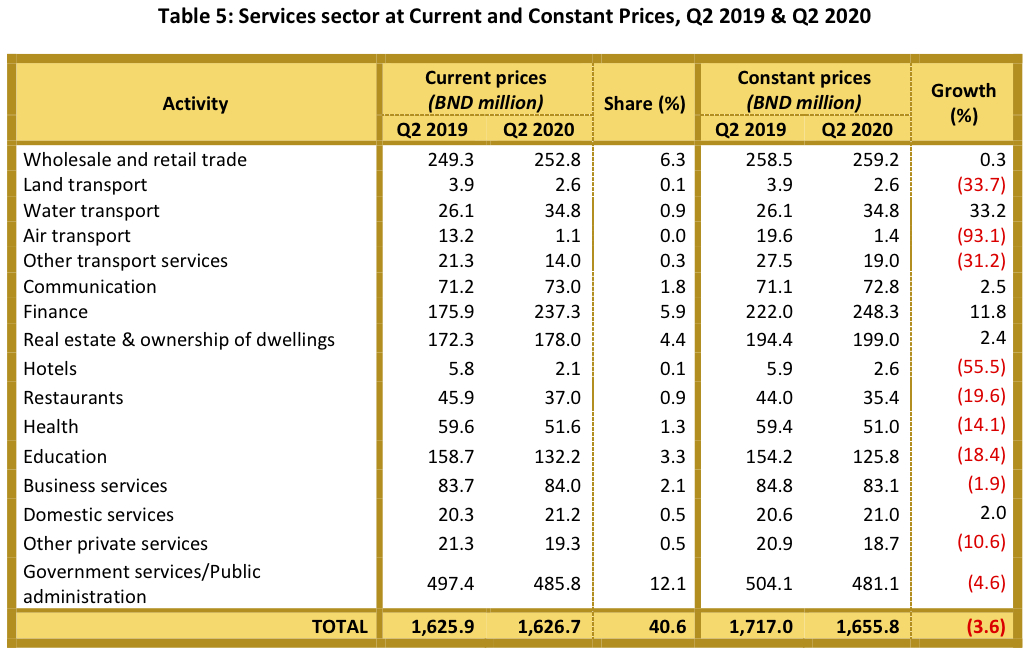 Ten out of 16 sub-sectors in the services sector are reeling from the effects of COVID-19 in Q2, including air transport with the steepest drop of 93.1 percent YoY.

The aviation sub-sector also reported a 21.8 percent fall in the first quarter of 2020 on the back of Royal Brunei (RB) Airlines’ suspension of 90 percent of its flights since the end of March.

The carrier has resumed flying to seven routes from August to October.

With tourism on a standstill due to a travel ban, the hotels sub-sector plunged 55.5 percent YoY – the second consecutive quarterly contraction this year.

CSPS said tourist arrivals, which had been on an upward trend before COVID-19 struck, tumbled more than 70 percent YoY in March as there were virtually no tourists in Q2 due to border closures.

The think tank does not expect the air transport and tourism sub-sectors to recover anytime soon. 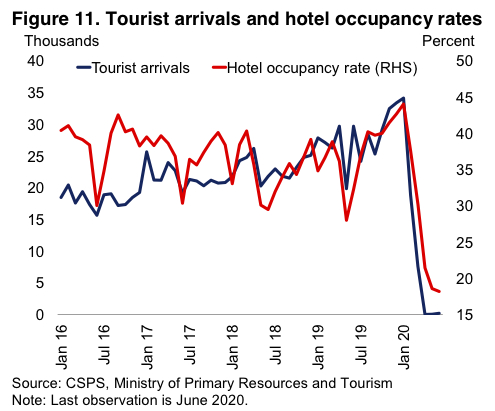 The overall services sector declined by 3.6 percent in Q2 2020 but contributes little to the national GDP.

The government had banned dine-in at eateries while schools were closed in March before gradually reopening from June.

Expanding at a rate of 11.8 percent, the finance sub-sector reported the second largest growth in Q2 after the downstream sub-sector.

DEPS attributed the growth to an increase in investment income related to banking services activities. 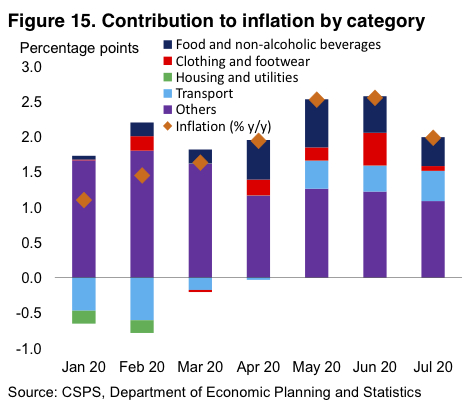 The pandemic has also triggered a rise in cost of goods and services, with the consumer price index (CPI) growing 2.6 percent in June – the highest since October 2008.

CSPS attributed the higher cost in goods and services to increased prices of insurance premiums, air transport, vegetables and beverages.

Global production and supply chain disruptions have led to higher prices of imported food items, household products and medical supplies, as seen in the price hikes of face masks and hand sanitisers.

The think tank stated that the CPI eased to 2 percent in July, while headline inflation increased for 10 consecutive months from September 2019 to June 2020.