BANDAR SERI BEGAWAN – Brunei is poised to experience a budget shortfall for the third year running in 2021 after the fiscal deficit worsened last year, projections from the Centre for Strategic and Policy Studies (CSPS) showed.

A sharp decline in earnings from the oil and gas sector have further compromised Brunei’s fiscal position in 2020, despite government spending cuts.

In its first annual flagship publication Brunei Economic Outlook 2021, CSPS stated that the fiscal deficit is expected to widen substantially to 15.1 percent of GDP in 2020.

The deteriorating budget deficit was attributed to the collapse in oil prices, with revenue from the energy sector almost three-fifths lower than in 2019.

For decades, Brunei has been heavily dependent on the hydrocarbon sector in generating government revenue, which fluctuates with oil and gas production and prices.

Due to low demand induced by the COVID-19 pandemic, oil prices slumped to an average of US$42 per barrel in 2020 compared to US$69 per barrel in the previous year.

Brent crude oil prices have since rebounded from record lows last April but they remain below pre-pandemic levels. 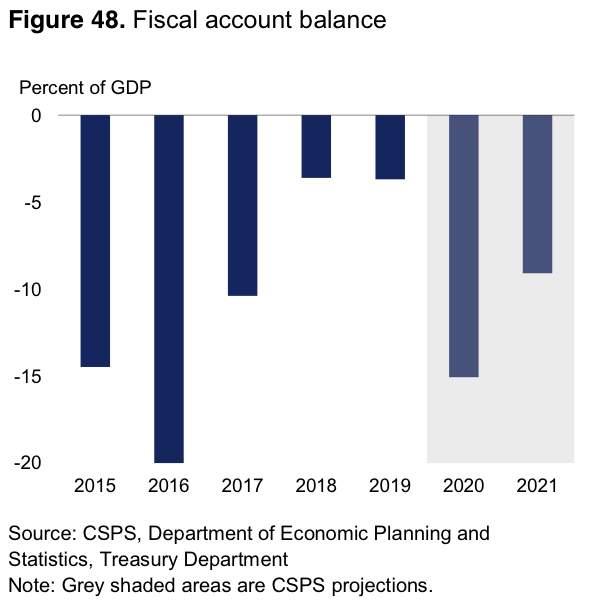 Brunei is headed for another fiscal deficit this year, but CSPS projects the shortfall to ease to 9.1 percent of GDP.

Revenue from the energy sector is forecast to be higher in 2021 as oil prices are projected to rise to an average US$50.8 per barrel and LNG prices at US$8.9 per million British thermal units.

With fiscal deficits for six out of the past seven years, the government has been facing increasing budgetary pressure as prolonged low oil prices threaten to extend revenue losses.

CSPS previously said the government would need to cut spending or introduce new taxes to balance the books as oil prices would remain low. 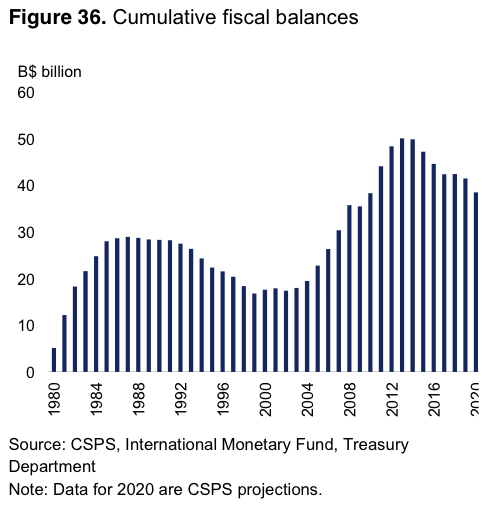 The think tank said the government drew down ample reserves to finance its past fiscal deficits.

“The government has been saving a fraction of oil windfalls, especially during the 2000s as seen in the rise in cumulative fiscal balances.”

However, accumulated reserves have dwindled after reaching a peak of about $50 billion or 220 percent of GDP in 2013 to less than $39 billion at the end of 2020.

At this pace, Brunei’s reserves could be exhausted in two decades unless revenue is diversified or spending reduced. 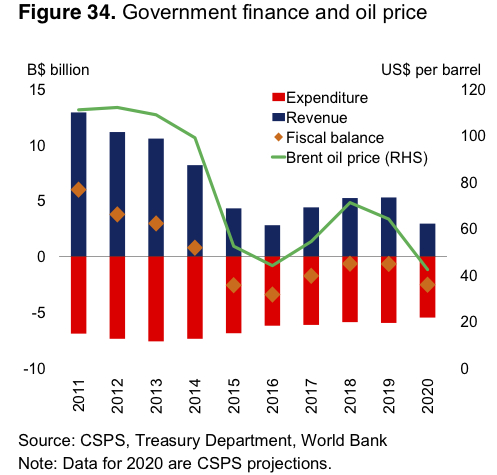 CSPS expects the downward trend of government expenditure to continue as part of fiscal consolidation measures to reduce the deficit.

Lower public spending would affect the non-oil and gas sector, given its high reliance on government projects.

CSPS data showed that capital spending on National Development Plan projects has decreased considerably over the past few years but is expected to pick up in 2021 due to project delays.

In contrast, cuts to current spending – including wages, salaries, pensions, allowances and other benefits — were limited.

“The public wage bill remains high at more than 30 percent of government expenditure.

“Nonetheless, there have been significant efforts at containing wage growth, which has been largely stagnant since 2015,” it added.

Current spending is predicted to fall in 2021 as fiscal consolidation efforts take hold after a temporary halt to support households and businesses during the pandemic last year.