BANDAR SERI BEGAWAN – The Brunei economy is forecast to bounce back from recession to post a positive growth of 3.7 percent this year, according to the Centre for Strategic and Policy Studies (CSPS).

In its annual flagship publication Brunei Economic Outlook 2022, the think tank said the economy is expected to improve with growth across various sectors this year after an estimated contraction of 1.5 percent in 2021.

While movement restrictions have gradually been lifted since November last year, the estimated 1.5 percent GDP contraction in 2021 represents Brunei’s worst economic performance since 2016, when the GDP declined 2.5 percent.

CSPS said real GDP has been lower than anticipated in the past two years, and that economic recovery will only be “partial” despite the relatively high economic growth forecast for this year.

The International Monetary Fund had projected the Brunei economy to expand by an average of 4 percent during 2020-22, but the pandemic has resulted in weak external and domestic demand.

CSPS said the 2022 economic forecast is dependent on several factors, including how the pandemic unfolds and uncertainty in the oil market.

One of the main downside risks is the emergence of new and more transmissible coronavirus variants that are resistant to vaccines as this might result in re-imposition of movement restrictions.

“The strength and duration of the economic recovery rests on the containment of the pandemic everywhere in the world. Unless unequal vaccine access is addressed through global cooperation, a full recovery is likely to be delayed,” CSPS said.

Moreover, a resurgence of the pandemic remains a downside risk to global oil demand and oil prices, directly affecting Brunei’s exports and revenue.

“The high volatility in oil prices has also been due to challenges in controlling production levels under the OPEC Plus agreement. Prospects for price stability are dependent on the level of cooperation among large oil producers,” the think tank added.

CSPS said the predicted economic growth in 2022 will largely be supported by the downstream oil and gas sector – consisting of production of petrochemical products such as methanol and fertilisers.

On the back of an estimated 6.3 percent decline in output last year, the downstream oil and gas sector is projected to grow about 30 percent in 2022.

“The sector was primed for strong growth in 2021, but has underperformed due to lower-than-expected petrochemical production and a delay in the commencement of a large fertiliser FDI project,” CSPS stated. 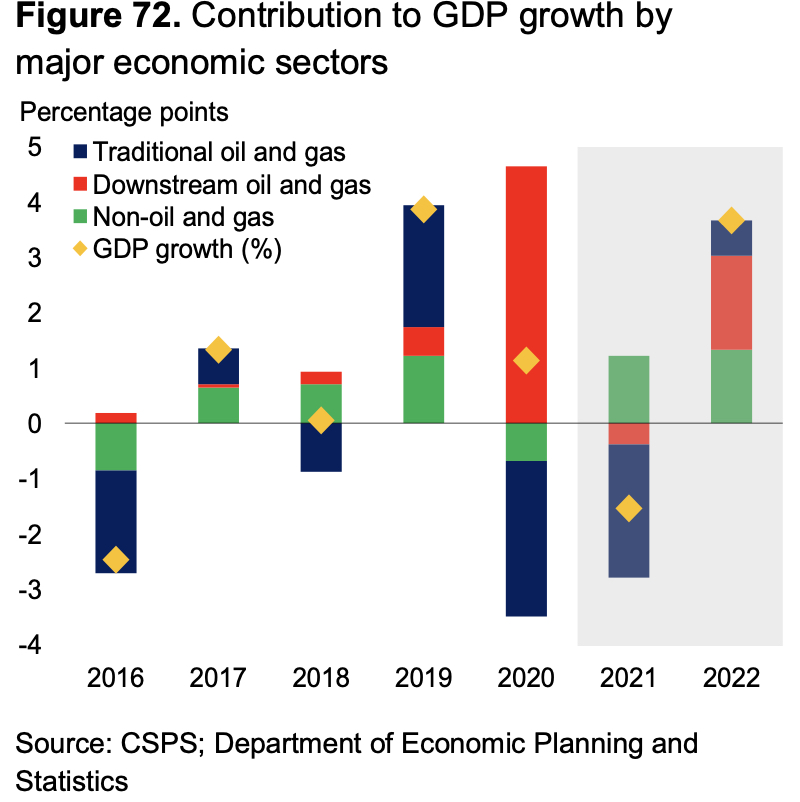 The think tank attributed the decreasing petrochemical production to lower external demand, but global economic recovery is expected to push up demand in 2022.

The start of ammonia and urea production in Q1 2022 will also significantly boost the downstream sector’s output, it added.

Meanwhile, construction of the second phase of Hengyi Industries’ oil refinery and petrochemical plant has been delayed to 2023.

The oil and gas sector, which comprises oil and gas mining and liquefied natural gas (LNG) manufacturing, is projected to grow 1.2 percent this year, after shrinking by an estimated 4.5 percent in 2021.

CSPS anticipates a marginal increase in supply, with crude oil production at 109,000 barrels a day and LNG production at 839,000 mmbtu/d.

Oil output declined to the lowest level of 97,100 barrels a day during the third quarter of 2021, while LNG production fell 9.3 percent in the first three quarters of last year.

Manpower shortages as well as ageing oil and gas fields had contributed to the scaling down of oil and gas production in 2021, CSPS said.

However, higher energy prices are expected to boost growth in the hydrocarbon sector this year.

Crude oil prices are forecast to average US$75 per barrel and LNG prices at US$14 per mmbtu.

The CSPS report further stated that crude oil and LNG no longer dominate Brunei’s exports as other petroleum and chemical products now account for the majority of exports.

Most of the exports of petrochemical products were bound for China and Singapore.

After four consecutive quarters of contraction, the services sector had staged a strong recovery in the first half of 2021 and is expected to stay resilient this year.

Most service sub-sectors are predicted to gradually recover after containment measures had restricted some economic activities since Q3 2021.

However, CSPS said prospects for recovery in tourism and travel remain uncertain as international travel curbs will remain until the COVID-19 pandemic is under control globally and vaccine inequality is addressed.

Looking ahead, the think tank said policy priorities should focus on driving economic recovery, especially in the worst-hit sectors, while structural reforms are needed to build a more competitive, resilient and inclusive economy.

“Enhancing human capital and building a more resilient education system should be a policy priority, which can include more effective remote learning, providing remedial classes to reverse learning losses, and closing the education gap and digital divide among socioeconomic groups.

“Initiatives to foster a business environment that is conducive to trade and investment should continue to be a priority, including improving trade facilitation and strengthening public service delivery by digitalising work processes,” the report added.